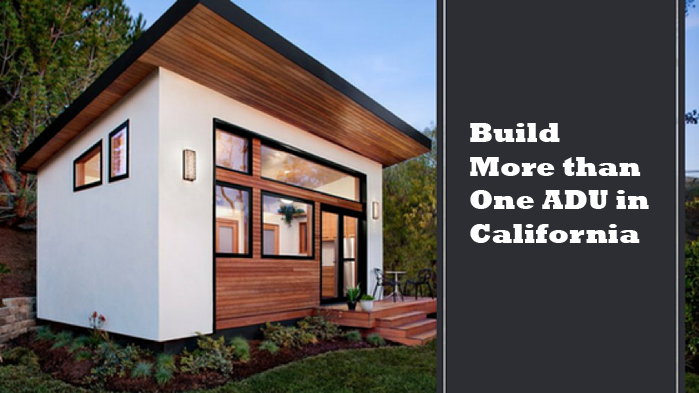 Property owners in California who are looking for ways to increase property values and rental income may already know that California has recently implemented changes to state law that make it easier to build Accessory Dwelling Units (ADUs) on their properties. Until 2020, most local jurisdictions only allowed one ADU per property, but that is no longer the case. Today we’ll take an in-depth look and answer the question, can you build more than one ADU on your property in California?

Prior to 2020, most property owners were limited to only one ADU on single-family lots. However, in an effort to address the state’s ongoing housing shortage, a set of 2020 state laws were passed that introduced the option to add an ADU plus a Junior ADU (JADU) to such homes, effectively allowing 3 units on a single-family lot. This configuration, however, is not without its restrictions and challenges.

What is a JADU?

The new ADU laws in California state that while a second ADU can now be built onto a single family lot, one of the ADUs must be a Junior ADU (JADU). A JADU is defined as a living unit under 500 square feet in size that has been created within the existing building envelope of a single-family home. This may include currently habitable space, such as a bedroom, or non-habitable space like a basement or attached garage. JADUs have the option of sharing a bathroom with the primary dwelling instead of having their own separate bathroom, allowing for a potentially smaller unit when space is at a premium. Most importantly, in order to add a JADU, the property owner must occupy either the JADU or the primary dwelling. This prevents landlords from adding 2 additional units to a rental property on which they do not reside.

Other Restrictions to Consider with JADUs

In addition to the aforementioned considerations, there are some other details to note regarding adding more than one ADU to a single-family property:

Can I Add ADUs to Multifamily Buildings?

What Qualifies as an ADU?

There are three main ways to create an ADU: build an addition attached to the primary dwelling (single-family only), build a new detached structure, or convert existing space into a separate unit. In order to qualify as an ADU, the unit must include its own private entrance, kitchen, and bathroom. For JADUs, a smaller efficiency kitchen may be included in lieu of a full-sized kitchen, and the unit does not require its own bathroom, although it’s usually preferred.

Are there Size Limits for ADUs?

Do I Need to Provide Parking for ADU Tenants?

In the past, when building an ADU in California, one of the more prohibitive requirements was the need to provide parking spaces for each new unit. If the property owner was unable to provide parking, then the ADU was not likely to be approved. Rules have now been relaxed to allow a maximum of one parking space per unit, which can be provided as tandem parking in the driveway. If a garage is being converted into an ADU, then that parking does not have to be replaced. In addition, parking is not required if the unit had been converted from a portion of the existing primary residence or is located in any of the following:

Recent changes to state law have made it easier than ever to add multiple ADUs to a variety of properties. If you’re considering the benefits of adding ADUs to your property, we invite you to consult with us here at Edrington and Associates. We have an extensive history of helping our clients navigate Bay Area-specific regulations when building ADUs and would love to help you plan your new addition.